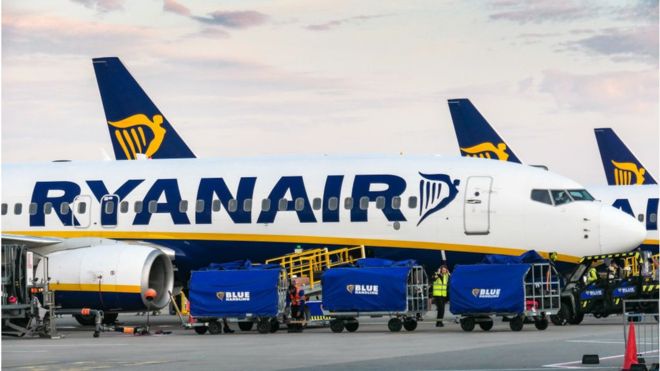 UK-based Ryanair pilots have voted to strike in a row over pay and conditions.

The British Airline Pilots Association (Balpa) has announced two walkouts, one from 22-23 August, while the second strike will be from 2-4 September.

It said pilots did not want to disrupt people’s travel plans but felt they had no choice after “decades of Ryanair refusing to deal with unions”.

But the airline said the “ill-timed” strikes would endanger pilot jobs.

It comes days after the budget airline warned of job losses following a 21% fall in quarterly profits, due to higher costs for fuel and staff, and reduced ticket prices.

Balpa said its members have many disagreements with the airline, including over pensions, loss of licence insurance, maternity benefits, allowances and pay structure.

“We have had no formal offer from Ryanair and it is imperative that we resolve this dispute urgently to avoid strike action,” said Balpa’s general secretary Brian Strutton.

“No pilot wants to spoil the public’s travel plans but at the moment it seems we have no choice.”

The union said 72% of its members at the company had taken part in the ballot with 80% of those supporting strike action.

However, Ryanair said that fewer than 50% of Ryanair’s UK pilots were members of Balpa, and of these, just 57% voted in favour of industrial action.