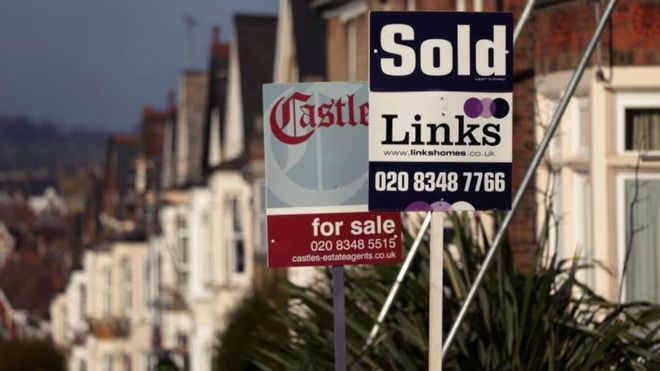 House prices and sales are “losing momentum” amid Brexit uncertainty, surveyors say, although parts of the UK are still seeing property values rise.

Key aspects of the housing market were “pretty much flatlining”, the Royal Institution of Chartered Surveyors (Rics) said.

Many homes valued at more than £1m were being sold for under the asking price.

However, it said prices in Scotland, Wales and Northern Ireland were rising at a “solid pace”.

This tends to be good for owners and sellers in these nations, but more of a headache for potential first-time buyers.

House prices continued to fall in London – where a higher proportion of £1m homes are sold, the South East of England, and East Anglia.

Overall across the survey, a net balance of 9% of surveyors reported house prices falling rather than increasing. Surveyors’ expectations for house sales in the next few months were flat, with an increasing proportion expecting prices to fall, the survey showed.

“The forward-looking metrics on prices and sales also seem to be losing momentum as concerns, clearly voiced in the anecdotal feedback – both about Brexit and political uncertainty – heighten,” he said.

The survey also suggested that rents could increase in the coming months. Demand for homes to rent in July was at the highest level since late 2016 under the Rics measure. At the same time, the number of new properties being listed for rent by landlords was decreasing.